Last time I reviewed GNOME, and of course, there is competition to GNOME from the rival camp of KDE. While GNOME tries to be a desktop environment fit for any purpose, the KDE philosophy is rather that the UI should be separate for each form factor. This goes back to the very beginning of Plasma, where KDE Plasma had a variant specifically for netbooks. Later on a project called Plasma Active was started to make an interface fit for tablets. It was promising, and I even tried using it on my previous tablet (however, that didn’t go so well since the tablet was not capable of 3D acceleration). However, since the transition to KDE Frameworks 5, Plasma Active has been largely unmaintained.

However, KDE did come up with an interface for mobile phones instead, calling it Plasma Mobile. It is in fact based on the Plasma Active codebase, but this time the focus is on phones rather than tablets. For a tablet, however, this is still better than a desktop interface. Though Plasma Mobile also doesn’t seem to be in the most healthy state as of late: the latest release of the amd64 ISO images dates all the way back to 2015, which, if I recall correctly, is about when Plasma Mobile was initially unveiled.

Thankfully it doesn’t seem like this project has been abandoned like Plasma Active was, since it is talked about in Akademy and so on. It’s more a lack of manpower, since there are a lot of other important pieces of KDE software that need manpower (the transition from Xorg to Wayland, for one). Hopefully there will be more development of Plasma Mobile in the future.

So, what is the current state of Plasma Mobile and how does it compare with the competition? Let’s find out! 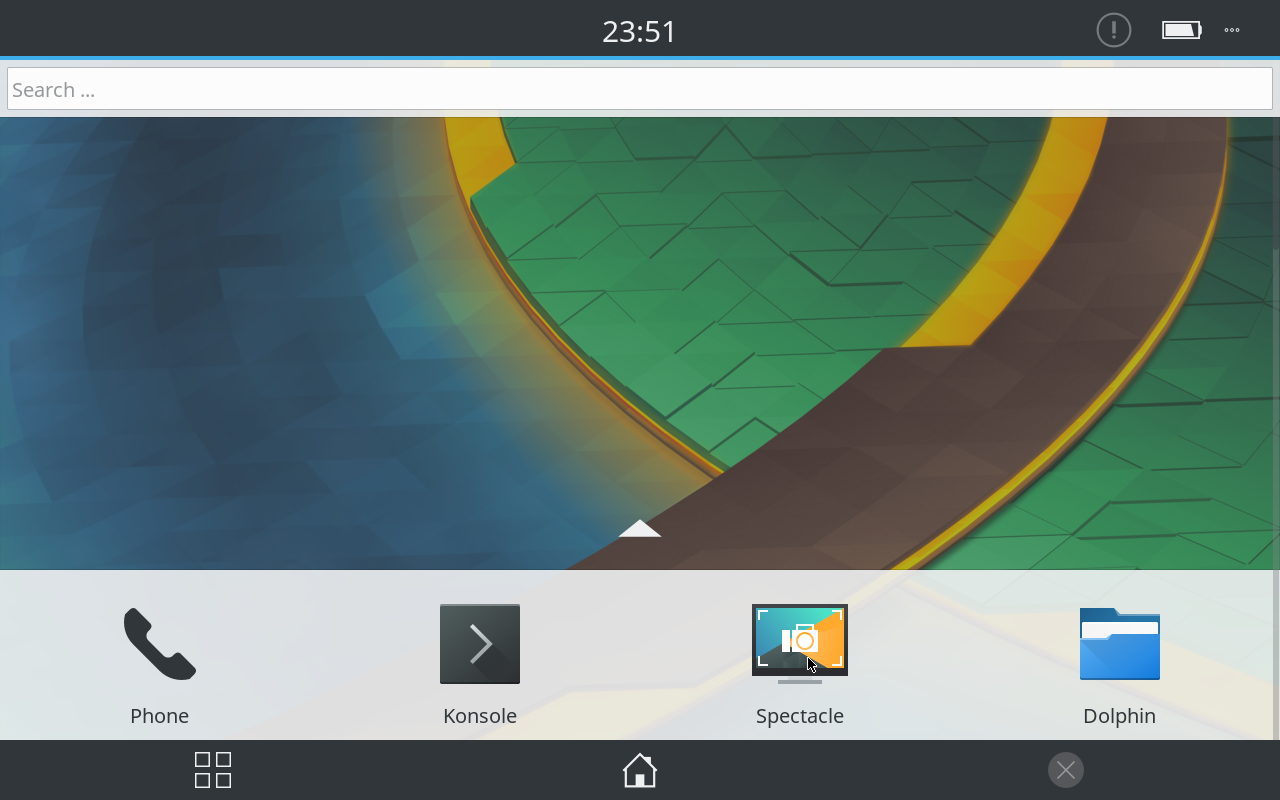 Since as I mentioned the ISO images are from 2015, that is hardly a representative test case. One of the reaons why I opted to install Gentoo was for Plasma Mobile specifically: it is very easy to write ebuilds for KDE Frameworks 5 git packages (existing eclasses take care of almost everything for you). There is no official ebuild for Plasma Mobile on Gentoo yet, so I needed to write my own.

When I did that and installed it, I was surprised that on launch, I didn’t get Plasma Mobile. Instead, I got… Plasma Active! What’s left of it, anyway. The only parts that still work are the activity carousel and the home screen configuration dialog. That’s not really waht I need!

After a bit of analysis I figured out that I also needed to install Plasma Phone Components for Plasma Mobile to actually be Plasma Mobile. After writing the second ebuild and installing it, it worked! Initially I was a bit confused as to how to start it, but looks like starting it from GDM (selecting one of the “Plasma” options) seems to work well, provided that Plasma Desktop is not installed (in which case the entry starts Plasma Desktop instead). 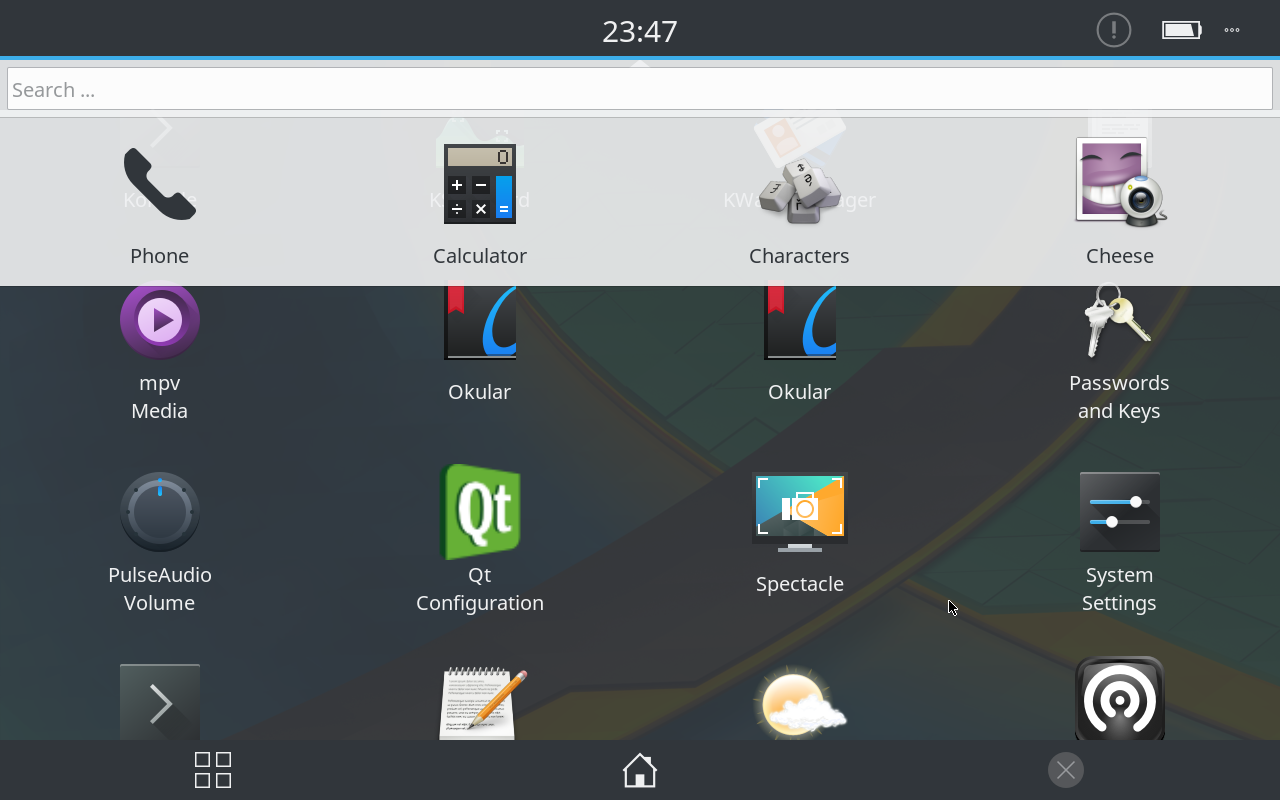 Overall, the current state of Plasma Mobile feels very much bare-bones. What works is the general layout, the app drawer, and plasmoids (as well as adding/removing plasmoids). The top pull menu works too, but isn’t overly exciting: it has a notification tab (which is for the most part empty), a power tab (which is quite useful) and an activities tab. The activities tab is a bit redundant, since sliding the home screen left and right switches activities in a faster manner. There are three buttons at the bottom, reminiscent of Android: running applications, home and close. The running applications button shows all windows in a fashion similar to an alt-tab menu, home is something of a “show desktop” button, and the close button is the same as a close button for a window.

While it’s a nice start, it certainly lacks in polish. There were some graphical glitches when pulling the app drawer, and the whole UI is basically impossible to control if no app is running in the background; the UI somehow seems to be interpreting any event as pressing the home button and nothing gets done unless you try real hard. Opening any application in the background works around the issue. Another weird quirk is that sometimes pulling the app drawer up or down causes the UI to interpret that as a gesture to switch activities. Not a big deal, just mildly annoying. 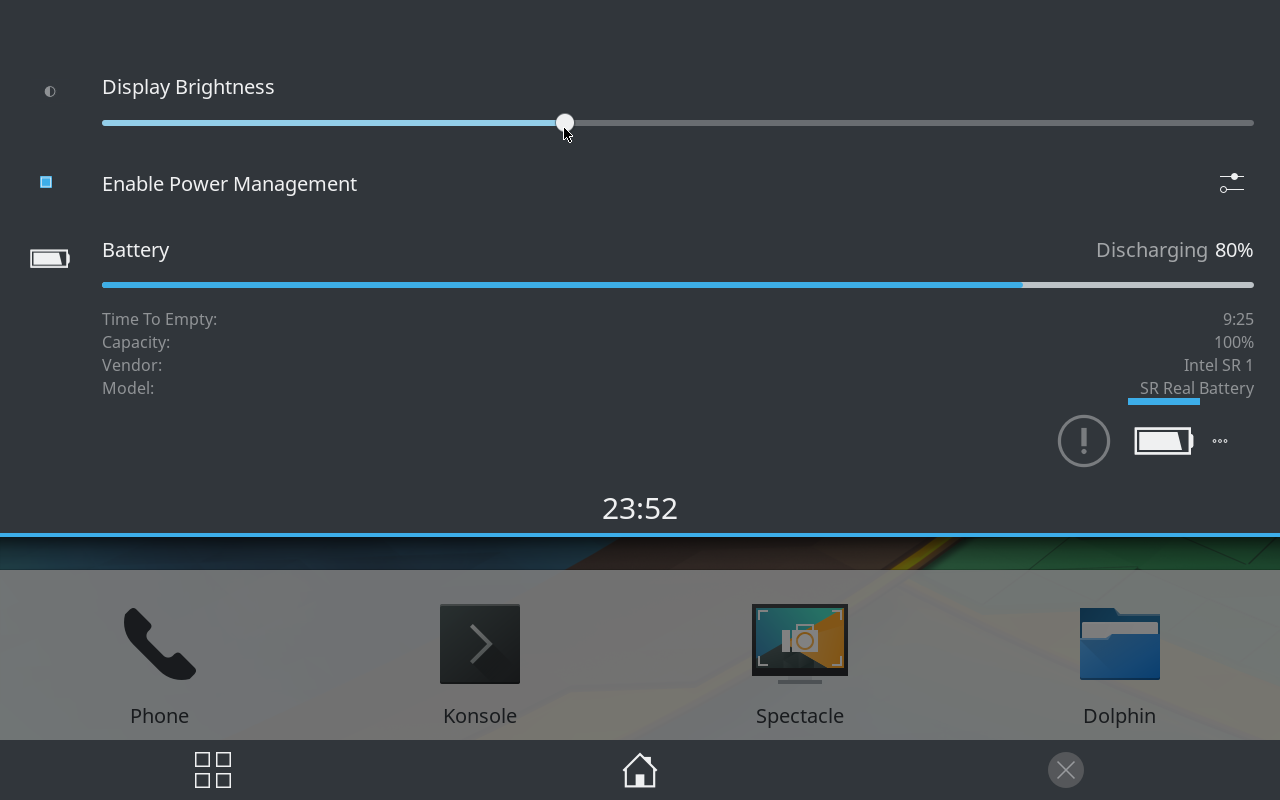 The whole idea of activities in the context of Plasma Mobile boils down to different desktop layouts: an activity has its own plasmoids, its own background image, and its own quick start icons. This is quite similar to Android.

At first I was a bit confused as to how plasmoids work. There is a default activity with a clock plasmoid (that opens a calendar when you tap it), but it took me a while to realise that I can long-press on a blank area of the screen to manage plasmoids. Though your definition of “blank area” may differ; sometimes it felt that only long-pressing on the arrow for the app drawer allows managing the plasmoids.

Another thing that was quite confusing was… the lack of a way to log out or reboot. Apparently there’s no such functionality built in yet. Thankfully, there is a plasmoid for it, though. Adding it gives two very large buttons that sumon the log out and shut down screen that you know from Plasma Desktop (which works fine in a touch environment). That was one useful plasmoid, but unfortunately do far most plasmoids seem to not be adapted to a mobile use case and just add desktop plasmoids instead (such as the system tray etc.).

One thing that I haven’t been able to figure out is the lock screen. It works to lock the screen… but not to unlock it. I enter my password, and KWin simply rejects it every time. I have to either switch to GDM and unlock the session from there, or switch to a virtual terminal and run loginctl unlock-sessions. I’m not sure why that happens.

In theory, Qt should have support for a virtual keyboard. In practice, it seems that there are some conflicts with QtQuick in my installation, so it fails to start. That’s nothing that should be held against Plasma Mobile, though, since I am using an ebuild I wrote myself, rather than anything official. And it’s git code.

On my tablet, Plasma Mobile starts in landscape mode. However, it’s pretty obvious that this was made for phones in portrait mode, since there is a whole lot of space being used by the quick launch icons. There are four app icons per row, and this number seems to be static at the moment. The portrait focus also leaves little space for plasmoids, and makes them look rather huge too. 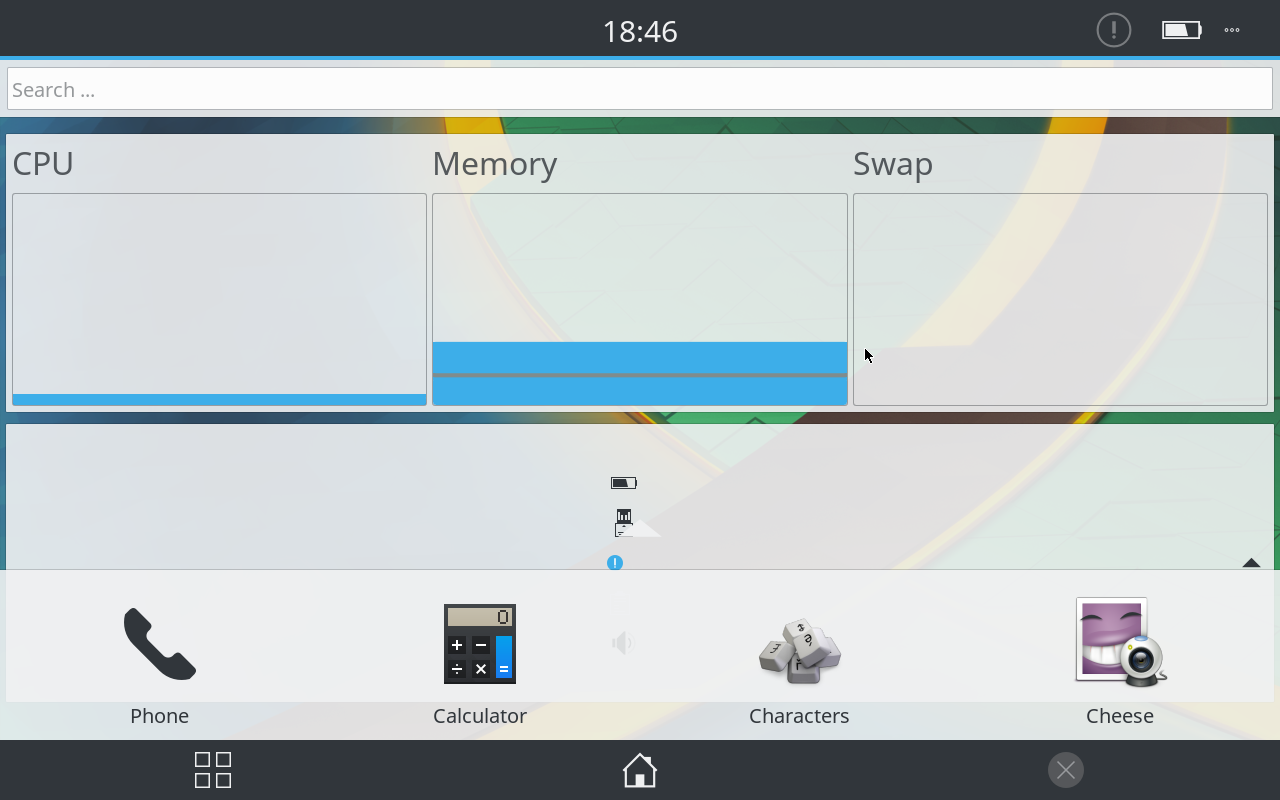 Plasma Mobile itself is really touch-friendly (if we discount the polish issues I mentioned). However, that doesn’t mean a whole lot, given that Plasma Mobile is basically a desktop and an app menu at the moment. Touch friendliness of each app differs. For instance, in Gentoo, the default browser is Konqueror, which is actually on its deathbed. Obviously it has no clue what this touch thing is, which makes Chromium as the best option with regards to internet browsing as well.

Okular, the KDE document viewer, is relatively touch-friendly by default. And, most importantly, it can read EPUBs. In Gentoo, there is an option to emerge a mobile version of Okular that uses the Kirigami framework: UI that adapts to a given form factor. However, my attempts at starting it were not very successful. I get a window with a “+” button and a three-dots button, but they don’t do anything. 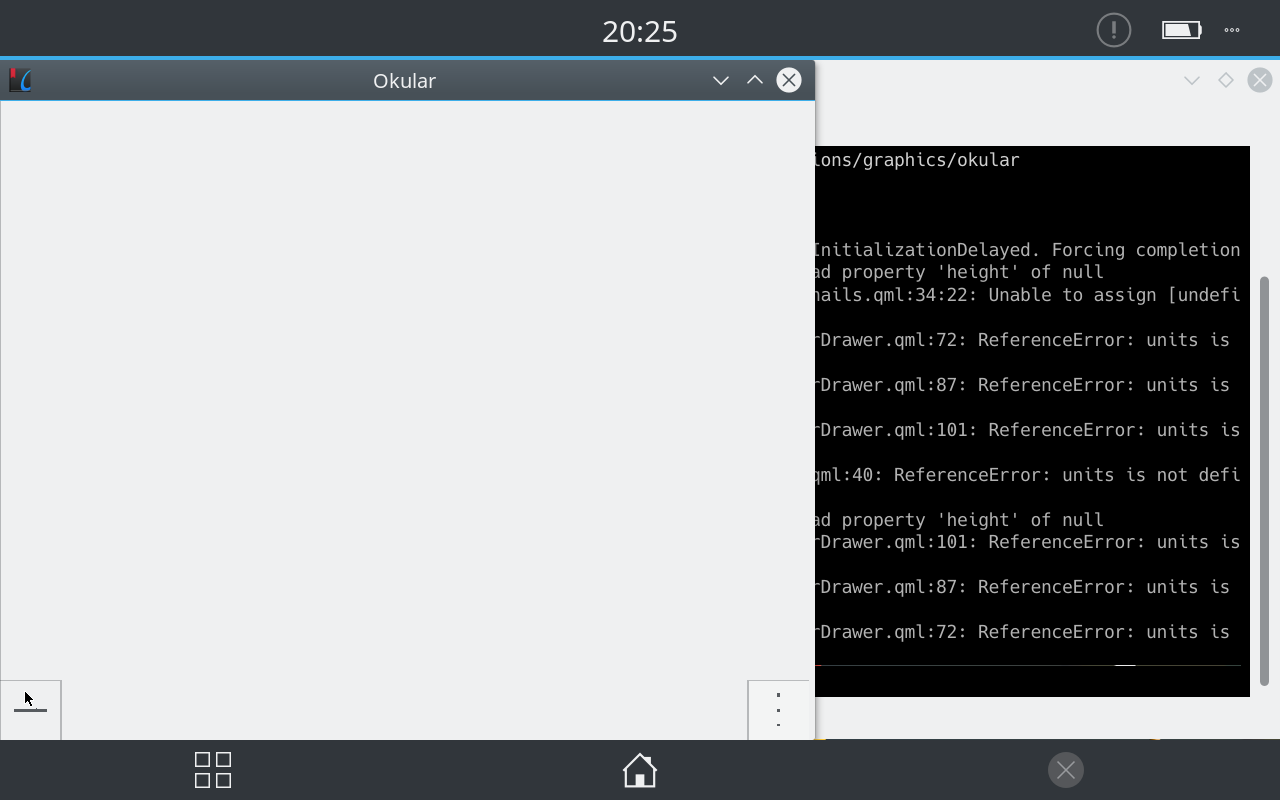 KWrite doesn’t seem to do anything special when launched in Plasma Mobile, and the same is true for pretty much all other apps. Dolphin is somewhat awkward to use by default, because it doesn’t understand long-presses and it relies quite a lot on having a right mouse button. Spectacle, the screenshot tool, works pretty well in a touch environment.

Plasma Mobile doesn’t have a dedicated settings app. It uses the desktop version, System Settings, which, while not terrible to use with touch, isn’t particularly optimised for it either. One of the things that can be customised in it is the display scaling. It is a slider that allows global fractional scaling, which is overall pretty nice; that’s something GNOME doesn’t have yet.

That said, while fractional scaling does work, it also still has some quirks. Some of them are being actively tackled right now; for instance, Okular rendering quality becomes really terrible with it active, but that’s already dealt with in this year’s Google Summer of Code and the fix should land shortly. A lot of the icons also look poor when scaled, but it’s likely my fault for not having higher resolution/SVG icons installed. What surprised me is that the splash screen that says “Plasma made by KDE” also looks badly pixelated; you’d think it would be rendered and not a raster! Another quirk is that unlike in GNOME, Google Chrome doesn’t seem to be aware of scaling and still displays everything unscaled, which makes it rather difficult to use. Also, in Konsole, I could see lines in between my terminal lines that showed the desktop background through. Unfortunately trying to screenshot it doesn’t seem to work.

Of note is that I only tested Plasma Mobile on Xorg. It does run in Wayland too, and perhaps scaling there would be better, but for some reason after one successful attempt at running it I couldn’t get it to work again. kwin_wayland simply hangs when launched, necessitating a SIGKILL to stop it (oddly enough, when trying to do that from KSysGuard, the window that asks for confirmation to kill hangs as well with no content rendered). I’m pretty sure this is a setup issue, though, since as I mentioned I did get it working earlier. 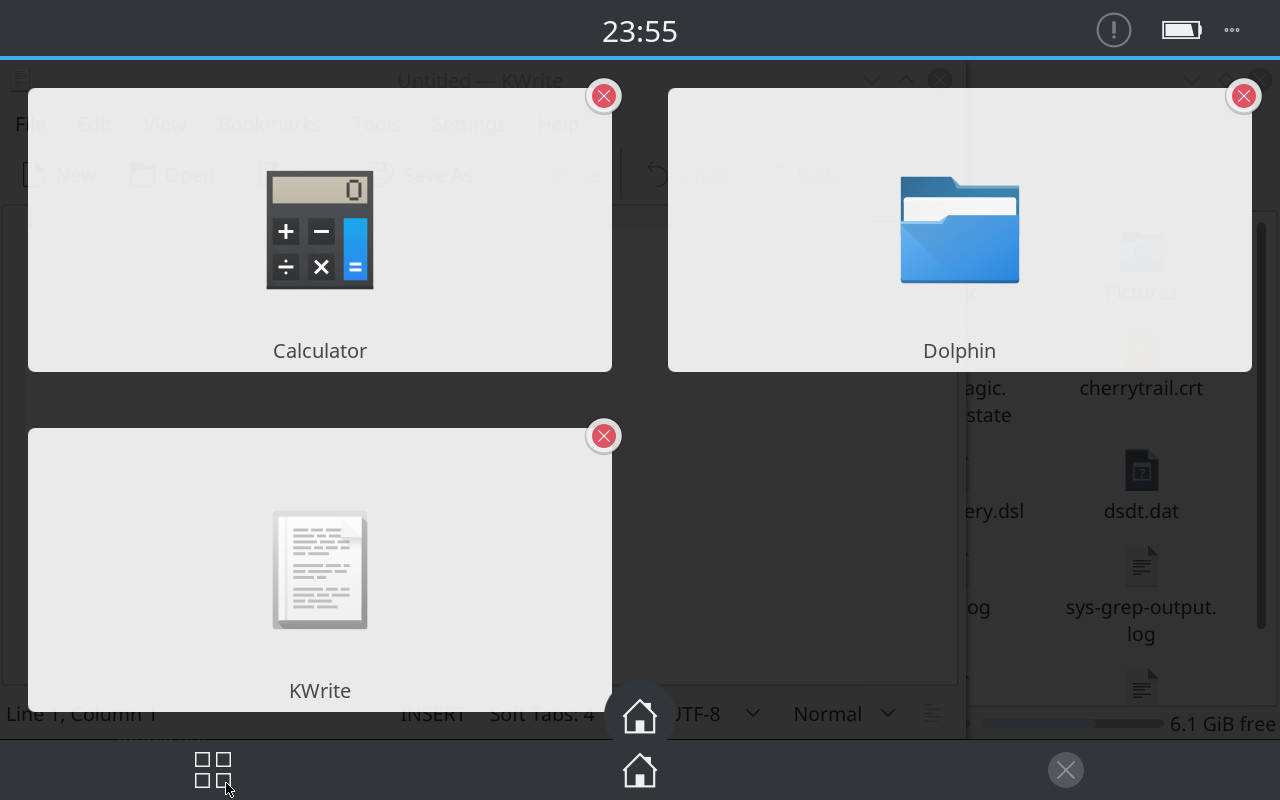 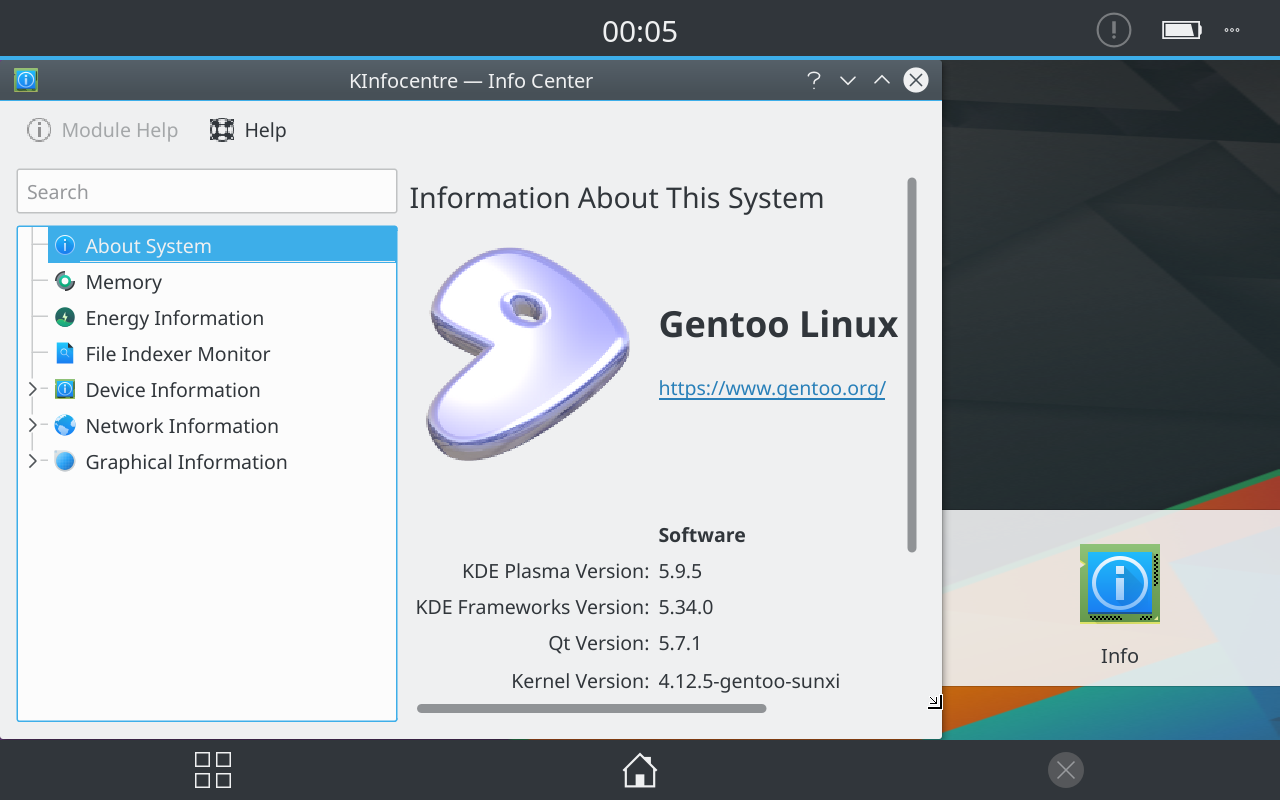 Plasma Mobile is quite bare-bones right now, and there are some quality-of-life bugs that affect it. However, it does show promise. Whether the potential will be unlocked or not, the future will show. It seems that some of the KDE community would rather see Plasma Desktop be made more touch-friendly for tablet usage, and leave Plasma Mobile for phones. In the end it will probably end up decided by how much effort is put into either of the two (and the current state of Plasma Desktop on tablets is not much better than that of Plasma Mobile, because there is a universal assumption that you have a right mouse button). And activity in the Plasma Mobile git repository has been relatively minimal over the years. So while I’m a Plasma user on all my desktop devices, I have to admit that GNOME remains relatively unchallenged for the tablet use case. KDE needs to step up their game to compete in this case.