The tablet is dead; long live the tablet!

It’s been a while since my last post about mobile OSs! I did some experimentation with Sailfish OS and ChromiumOS, but they were not very fruitful. Sailfish OS needs a custom Mesa package to be able to handle any new graphics cards (and it’s a beast to build, so even though I could try making a package for it, it’s not overly worth it), and ChromiumOS built but didn’t want to run.

In the end, I stayed with Gentoo and GNOME for the time being as my main OS. However… The detachable keyboard started to consider itself detached more often than I liked. I would need to press the tablet onto the keyboard to get a good connection, and typing while your hand is busy holding the thing in place is not overly efficient!

And lo and behold, it turns out that the tablet had a mere 1 year warrantly, which ran out this March. (Seemingly all such items in EU should have a warranty period of 2 years, but I guess you can’t do much aside from going to court with HP…) The price for repairs? Just a few euros short of buying a new one! (I’m pretty sure that their repair would in fact be just giving a discount on a new one.)

So the HP x2 210 G2 was an interesting experiment (and it still works as a tablet, but not for my intended use!), but ultimately it was short-lived. 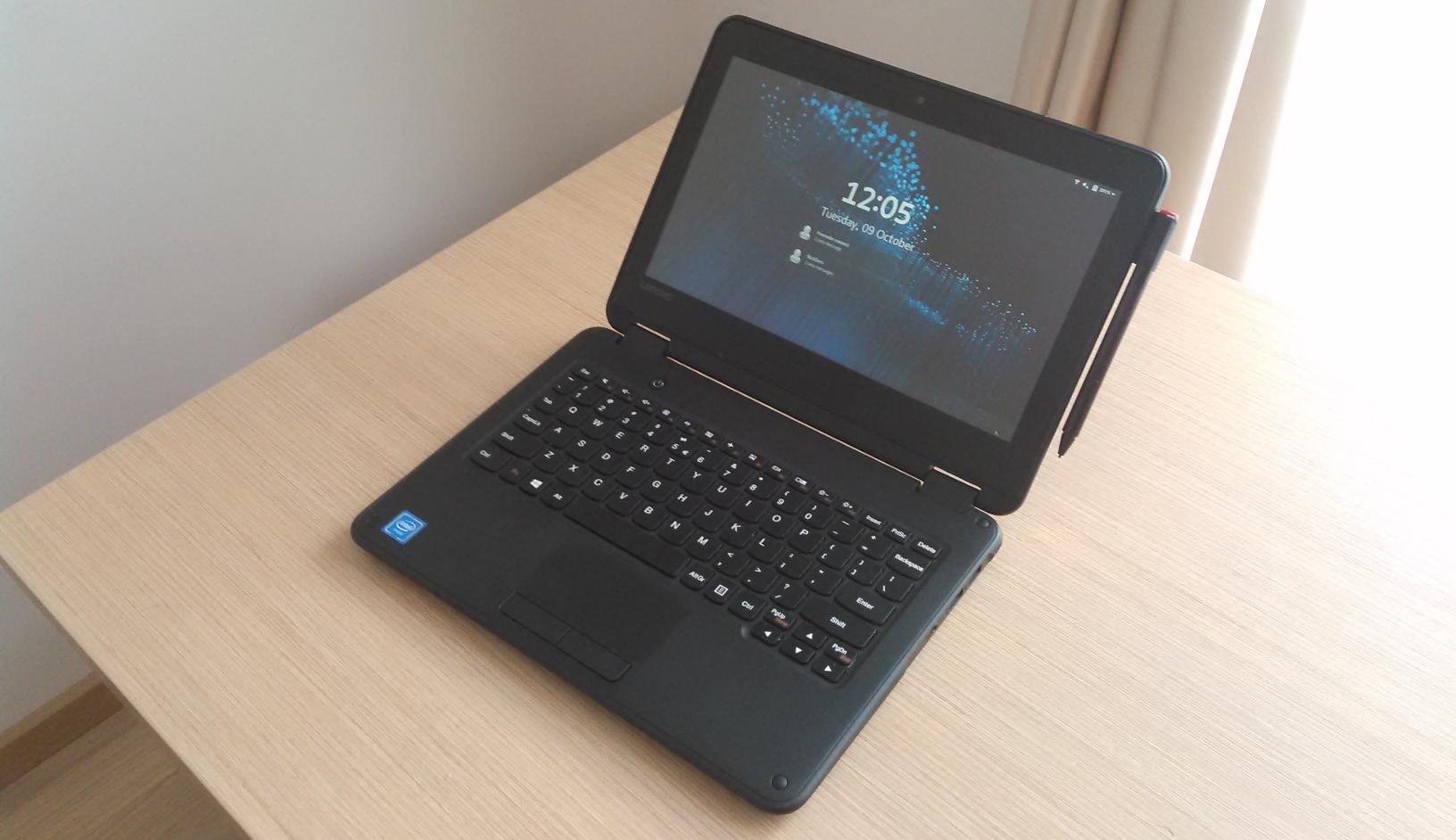 After doing a lot of looking around for what could be a suitable replacement, I decided to go for a Lenovo 300e convertible. After the HP tablet, I didn’t want to have something with a detachable keyboard any more, since it’s clearly highly unreliable! Convertibles are probably not very reliable either, since the hinges must take a lot of pressure, but it should at least last longer.

Lenovo’s naming scheme reminds me of Apple: there are a bunch of 300e convertibles, and the real model name is actually the very first part of the part number: 81FY.

The cost was higher than that of a replacement HP x2 210 (400€ rather than 300€), but its specs are also much better. It sports an Intel Celeron N3450 (Apollo Lake) processor, which is an honest quadcore laptop processor and a huge improvement over the HP’s Atom x5 Z8350. The 300e-81FY also comes with 4 GiB RAM, and most importantly, 120 GB eMMC. That is enough to put all the operating systems, and more! The screen resolution is much better too, it’s the laptop standard 1366×768, which means that even dumb programs like Skype fit on screen. But the thing that makes the most difference is in fact the input: this device comes with a Wacom 5122 touchscreen and stylus! The stylus alone is almost enough to cover the differences in cost. It has two buttons: the front button puts the stylus into eraser mode, the back one is configurable. As usual with styli, it’s powered with a AAAA battery, which are a pain to find. But it’s worth it, because the stylus is so much more precise than fingers, and it allows drawing charts and diagrams by drawing. It’s been since my first tablet that I had a stylus, and the technology seems to have improved a lot since then! 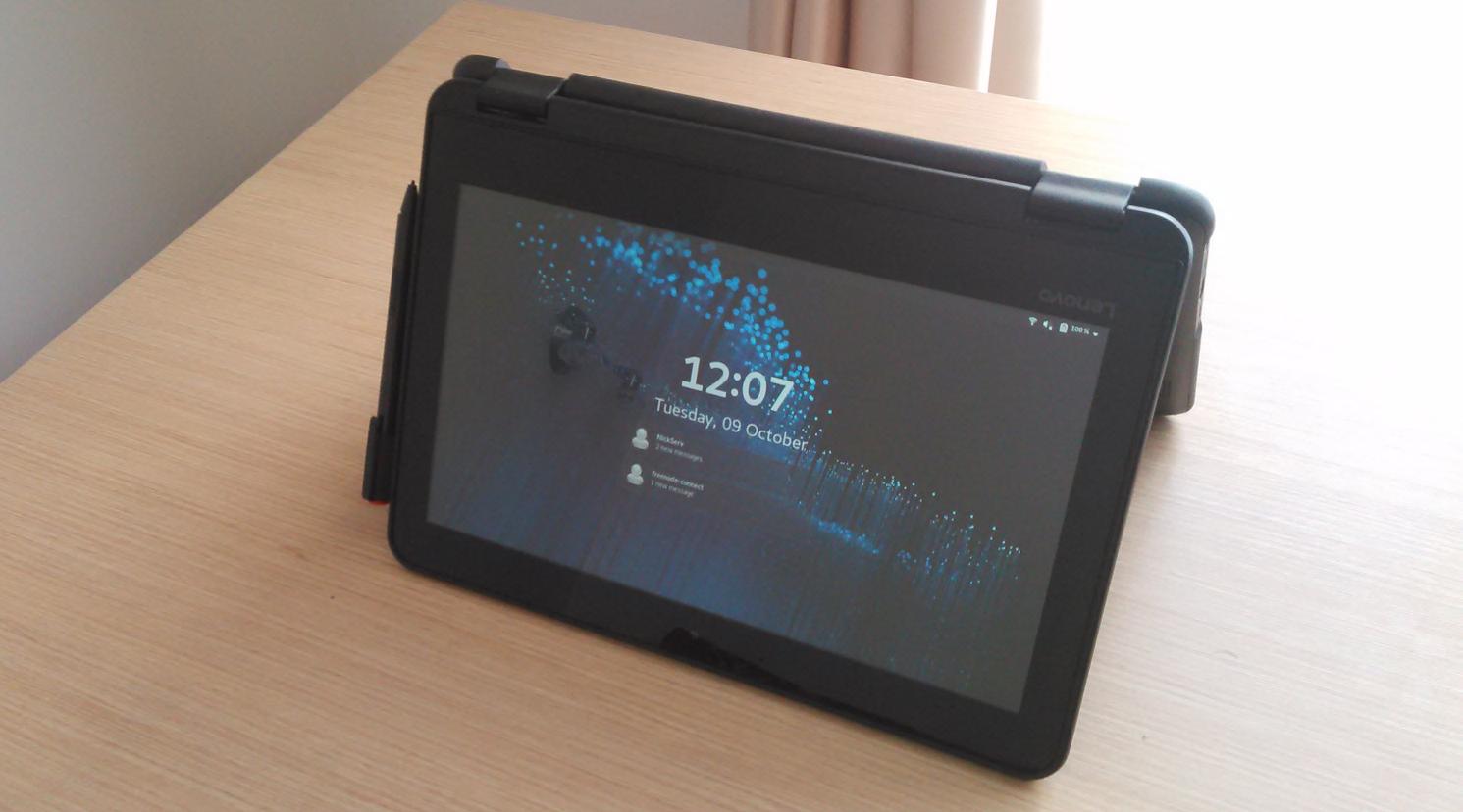 And then the keyboard is standard QWERTY, with keys that feel really nice. It’s not quite as nice to type on it as it is on an EeePC, but it comes very close. The keys are not wobbly, have a short travel distance, though they are quite noisy. It also slightly annoys me that the Home and End keys have been put under the Fn modifier for the Page Up/Page Down keys. It should have been the oter way round, since they are really useful keys! The keys are in a niche, so that when the convertible is put into tablet mode, the keys are not accidentally pressed. Better yet, the keys deactivate when that is the case (hardware switch?). So even if you do press them, it’s not an issue, no matter the OS you’re using!

The wireless functionality is provided by an Intel Wireless 8265/8275 card (iwlwifi driver). The firmware works out of the box. There seem to be some snags with connection losses that I need to investigate, but otherwise it works fine, Bluetooth including. More on that later. As a bonus, there’s also a screen rotation sensor.

My Lenovo 300e-81FY came with a standard Phoenix UEFI (with very limited options: just Secure Boot, legacy boot switch, and boot order), and Windows 10 for Education (equivalent to Pro I guess). More on the former in the next post! (The latter isn’t very interesting, refer back to my post about the HP x2 210.) 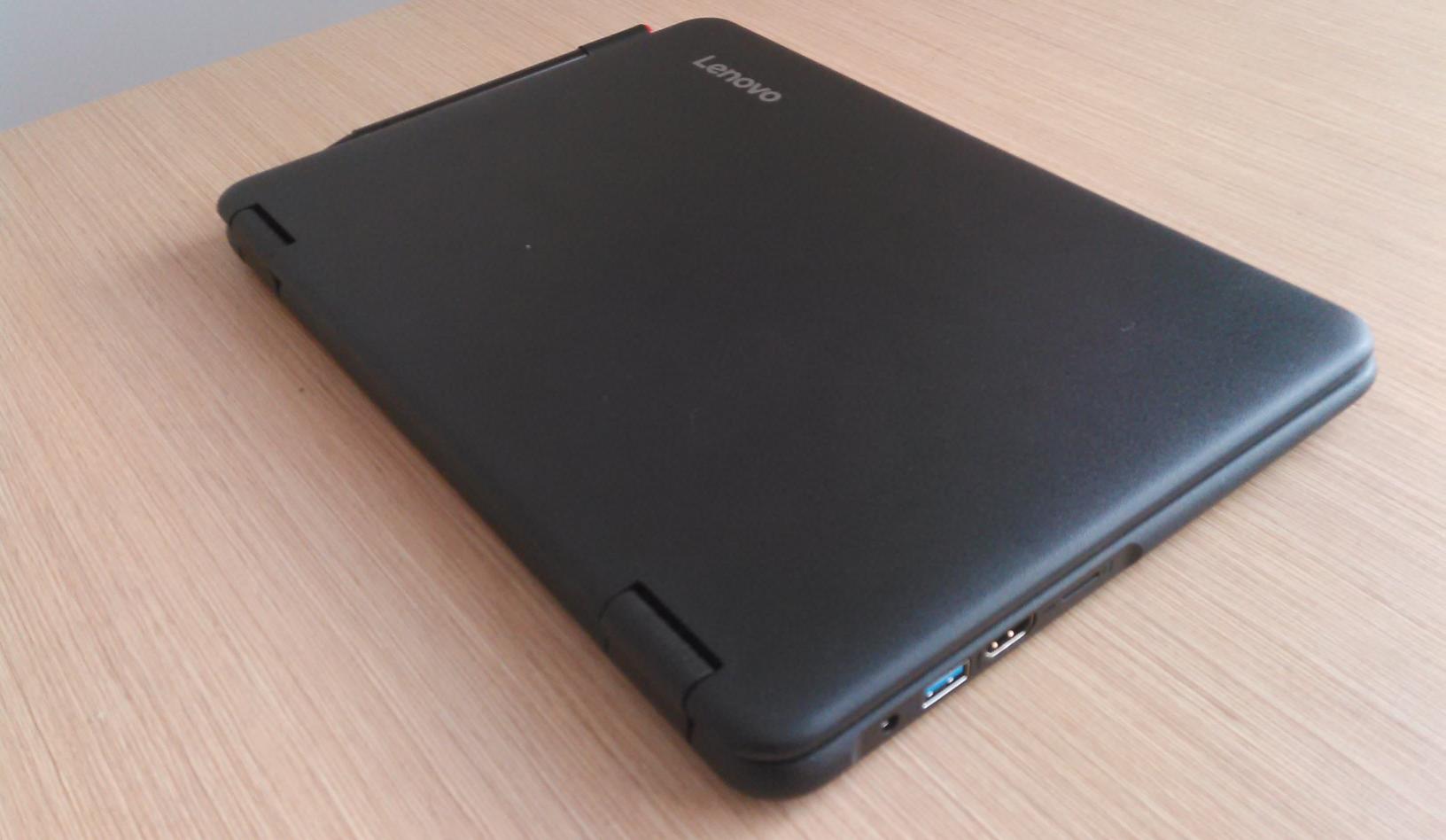 So far I’m very happy, it’s a marked improvement over the HP x2 210! Mostly in terms of performance and software compatibility. See the next post for the details about how Linux setup worked!